How does Scope Mate Help Night Vision Hunting? The World Smallest Thermal Monocular InfiRay T2pro Will Tell You the Answer. Scope choice is a hot topic with hunters worldwide. There are many things to factor into a scope choice. What game will be targeted for harvest is the first consideration. Next where and in what conditions the equipment will be routinely used must be decided. Both night vision and thermal imaging assist a hunter in detecting, recognizing and identifying his targeted game animal. The choice of night vision and thermal imaging is weighted by several considerations.

Thermal imaging detects minute differences in heat when detecting game. Thermal scopes detect radiation and do not require any visible light to produce an image. Thermal imaging devices can be used equally well day and night. Animals generate heat and are warmer than their surroundings making it possible to detect them at great distances using thermal imaging. Night vision relies on at least some ambient light for detection making detection at great distances more difficult. If shooting at night the moon and stars should provide sufficient light for a night vision scope. In the absence of natural light, IR illuminators are used to generate light. They work like flashlights for night vision; but are not visible to the naked eye. Alternately, night vision cannot be used in bright light because it will damage the intensifier tubes that make a night vision scope work. 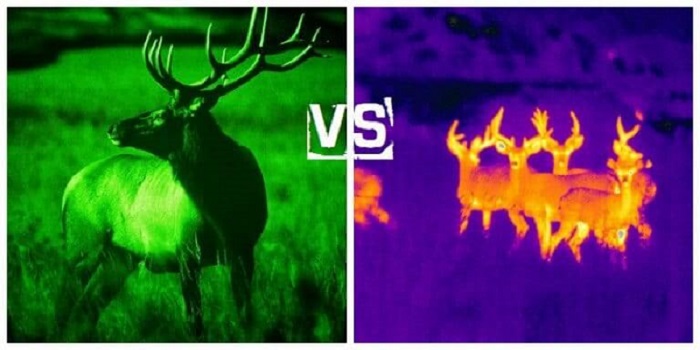 Once a live animal has been detected a hunter needs to recognize it and identify it as the targeted game. If using thermal, images are displayed as black and white or various shades of color. Various colors are used to represent temperature. In thermal imaging the hotter the object the lighter the image; though newer thermal scopes can invert black and white or utilize a range of colors to differentiate heat intensity. Even though a live object can easily be detected using thermal, recognizing it and identifying it as the desired game at a great distance is more difficult. When using night vision, visible light energy bounces off the game and a detector receives and turns it into an image of the animal. Night vision is only problematic if the game is camouflaged or is standing still. Many night hunters prefer thermal because they can see through crops or fog while hunting. As a rule the image is more easily recognized and identified as the targeted game to harvest using the night vision capabilities under ideal conditions.

Durability of the Scopes After detecting, recognizing and identifying the game it can be harvested as desired. Thermal is best used to detect the desired game object. Night vision is best used to recognize, identify and harvest the game only if facial recognition is required or for deer depredation. If you have your choice of options, thermal imaging is the best twenty-four hour imaging option.

This email has been registered!

Back In Stock Notification